I can't believe another Blogger's Quilt Festival has come around yet again.  I have joined in quite a few Blogger's Quilt Festivals and thought I would again - thank you for organising Amy - I always enjoy visiting many of the other quilts.  I know it is the Fall Festival, however, I am sharing what is very much a Spring Quilt given that it is Spring in Australia.


I have recently quilted a very cheerful strippy spring quilt for my customer Karin.  Karin made this colourful quilt for one of her grand-daughters, alternating rows of stripped triangles with strips of appliqued birds. 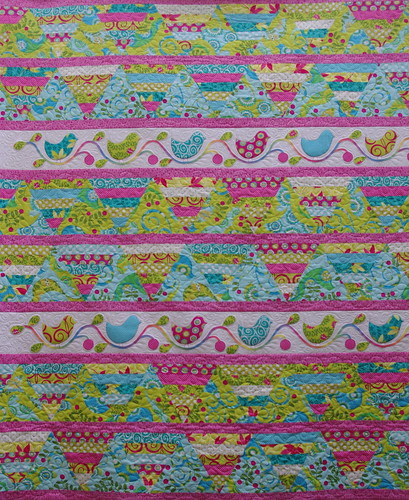 As Karin's fabrics were very busy and the quilting on the strips of triangles would not show much, we decided to combine edge-to-edge and custom quilting.  The triangle strips are quilted with an all-over design called Daisies Galore.  The applique strips have been outlined around the applique and then quilted freehand with a back-ground fill. 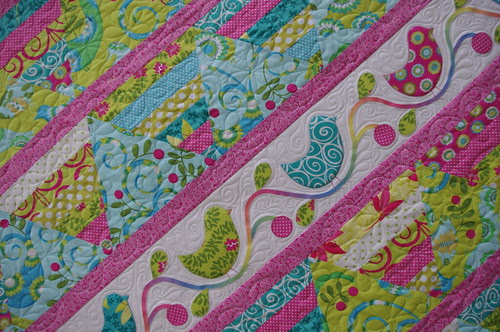 I love the whimsical quilting around the birds. 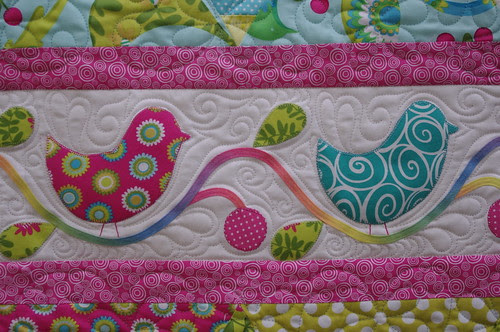 I hope your Granddaughter is enjoying her beautiful quilt Karin. 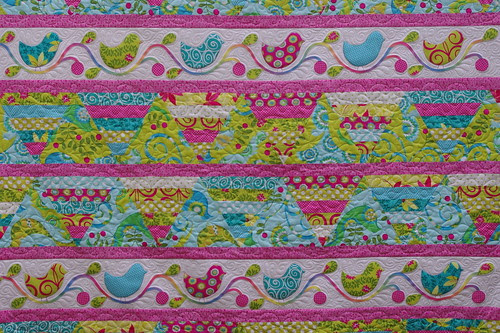 Remember to go over to Amy's site and visit many of the other wonderful quilts in the Blogger's Quilt Festival - Fall 2012 - enjoy!
Posted by Quilts on Bastings at 9:14 PM 15 comments:

Last Friday my 12 year old son and I went to the Exhibition at Quilts in the Barn.  This year's exhibition, "Infinite Variety Revisited" was a wonderful display of Red & White Quilts.  To my son's surprise, he too enjoyed the exhibition (especially with a stop at a lolly shop on the way home).

I will leave you with some of the highlights. 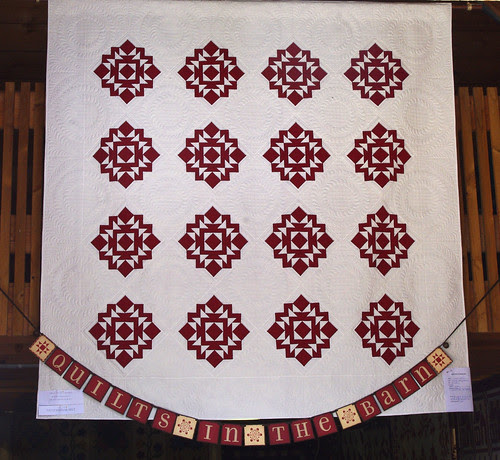 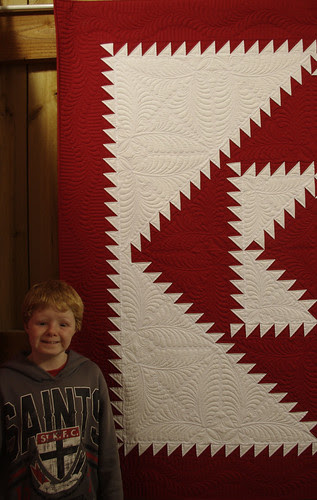 A slight bias towards this quilt - see some of my previous posts! 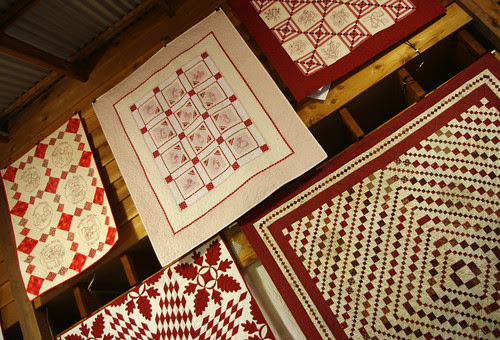 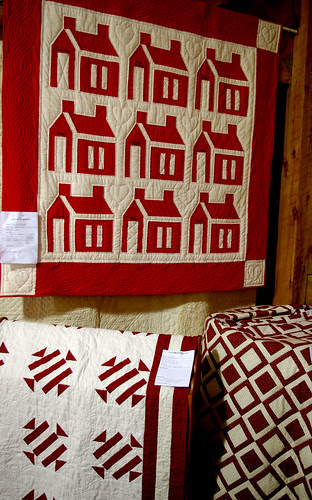 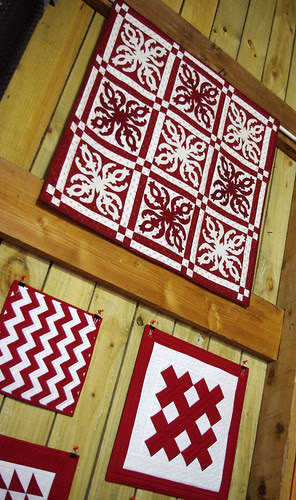 There were many small wallhangings, creating a great display. 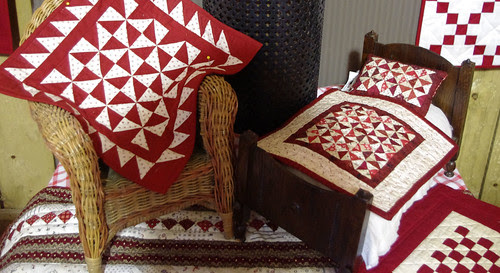 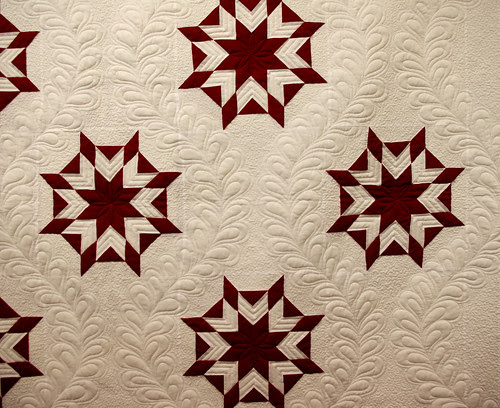 And lots of lovely quilting!

Thank you Linda for another wonderful exhibition at Quilts in the Barn.  Congratulations - I am sure you will have raised lots of much needed funds for breast cancer research.
Posted by Quilts on Bastings at 8:49 PM 3 comments:

Labels: exhibition, Quilts in the Barn, Red and White Quilts

The following Diamond Sawtooth Quilt is the last in a series of stunning Red & White Quilts I have quilted for Linda Collins of Quilts in the Barn.  This quilt too will feature in the upcoming Quilts in the Barn Exhibition as detailed in my previous post.  As usual, Linda's piecing was incredibly accurate - on this occasion she had paper pieced the half-square triangles resulting in perfect points. 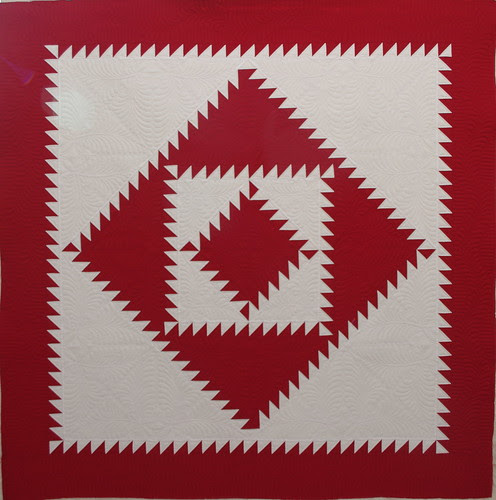 Linda gave me the freedom to quilt as desired, as long as it included feathers.  I spent quite some time designing the quilting elements, using the Divide and Design concepts outlined in Lisa Calle's DVD.  Each triangle was divided and the same element quilted into each triangle either once, twice or four times depending on the size of the triangle. 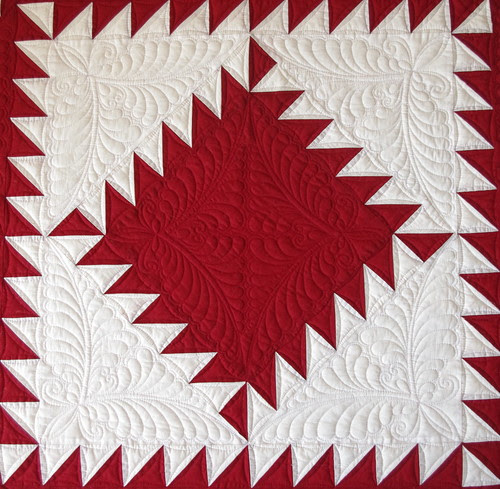 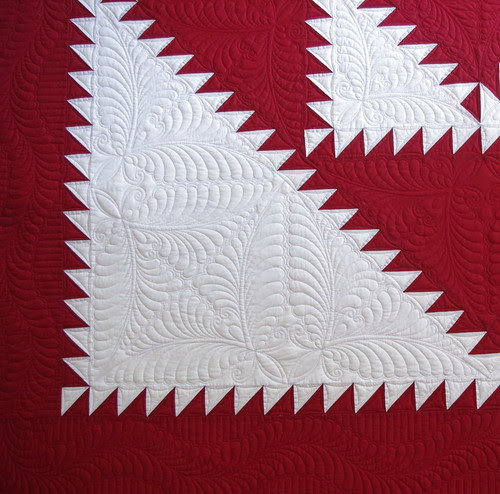 The border was quilted with a simple undulating feather with straight lines.  The straight lines were quilted using one of the Quilter's Groove Rulers which made the spacing of the lines straightforward. 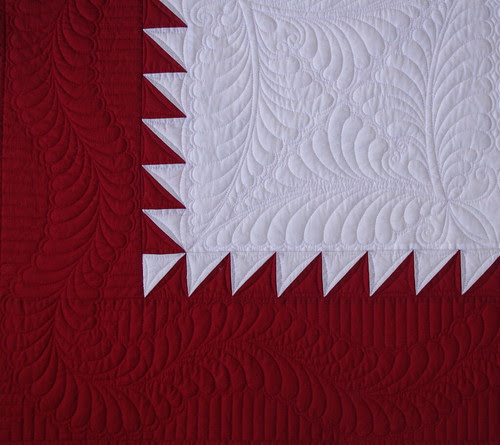 All was going really well until I decided to remove some of my blue dividing lines with a spray of water.  Being a red and white quilt, I was being conscious of the possibility of bleeding.  I had used the blue wash out pen on the white fabric only and had used chalk on the red.  You can imagine my horror when on spraying the white fabric, being careful to avoid any red fabric, a pink stain appeared - the backing fabric had bled into the top fabric.  At 11pm on a Saturday evening, I took to the computer googling madly for solutions to this problem - I did take some comfort from other quilters who had experienced the same problem.  After a restless night, I rose early to finish quilting the quilt and visited the supermarket to buy some Colour Catchers.  I consulted Linda who confirmed that none of the fabrics had been pre-washed.  We agreed that I would was the quilt, hopefully rinsing out all the excess dye including the bleeding which had occurred.

I tested some off-cuts of the backing fabric in some warm water in the bath - it turned pink!  Eventually, the quilt went in with a whole packet of  Colour Catchers.  Again, the water turned pink.  After a second and third rinsing, all the colour appeared to be gone and fortunately, the stain had washed out as well.  I am not sure how the Colour Catchers work, but they do appear to be effective - each of the sheets started out white. 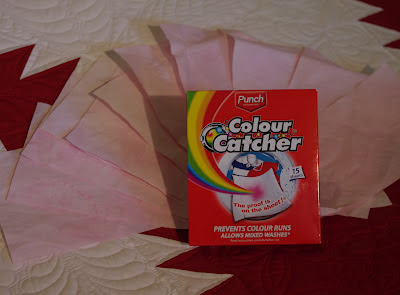 Posted by Quilts on Bastings at 8:58 AM 9 comments: 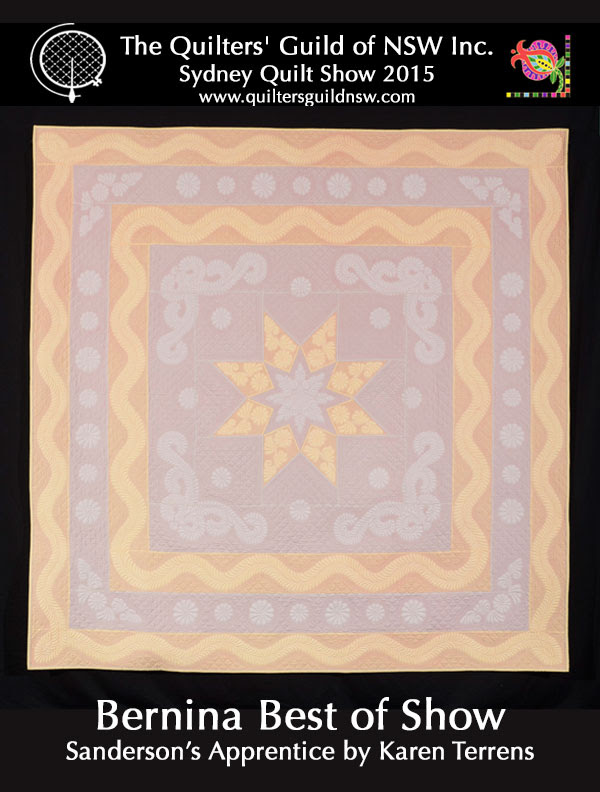