I have been trying to finish some of my UFO's and have finally managed to put the binding on this little wholecloth quilt which was quilted some time ago. 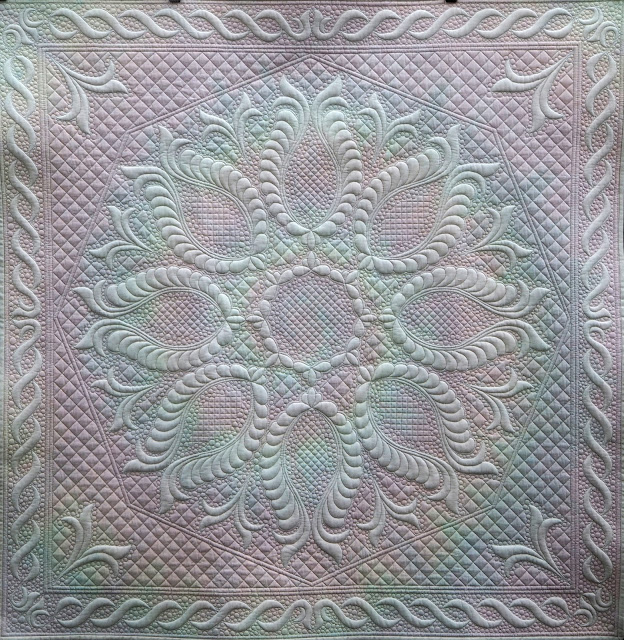 "Opals" is made from a pre-printed Bernatex Wholecloth Quilt Top which I purchased when I went to Houston in 2011.  I found the pre-printed quilt top a great way to improve my accuracy in following quilting lines.  The quilt measures about 38 inches square.

I wanted to do something a little different rather than just quilt as is so I added cut-away shadow trapunto.  I used a custom dyed fabric for the layer between the cut-away trapunto and the wadding - it was a very bold piece dyed for me by She's Got Mojo.  I also added pebbling around the feathered motifs and in the border. 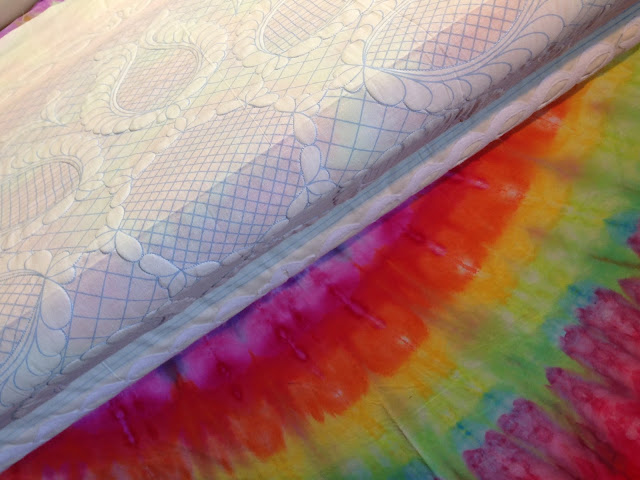 The end result has been fairly subtle - I might like to try this again with a slighly more transparent quilt top for a bolder effect.  Nevertheless, I do quite like the subtle opal shading which it has created. 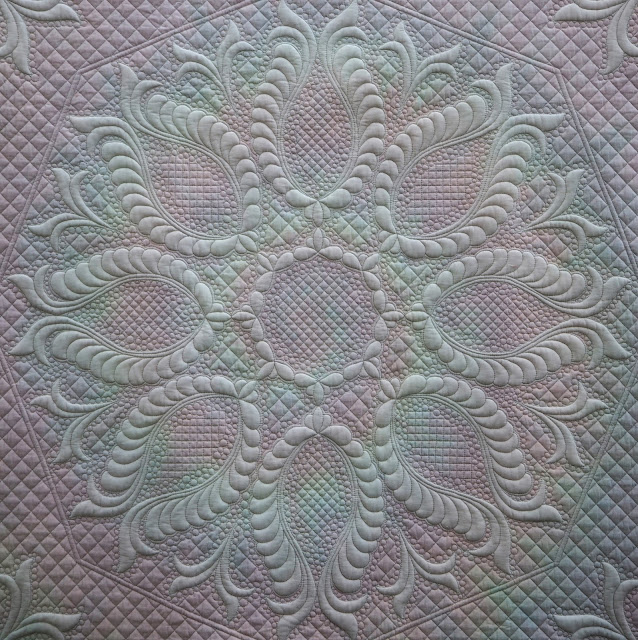 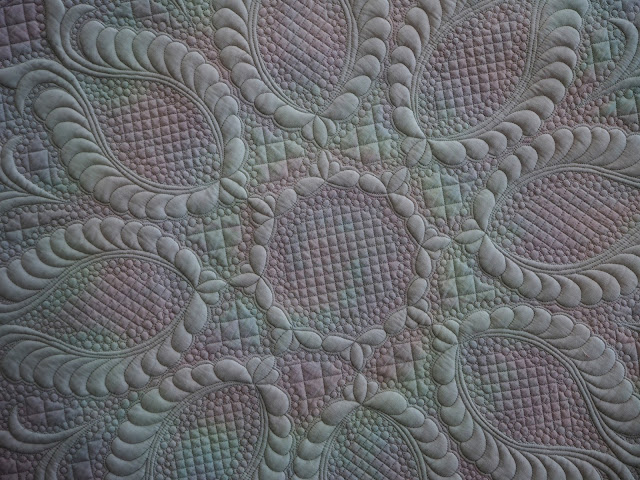 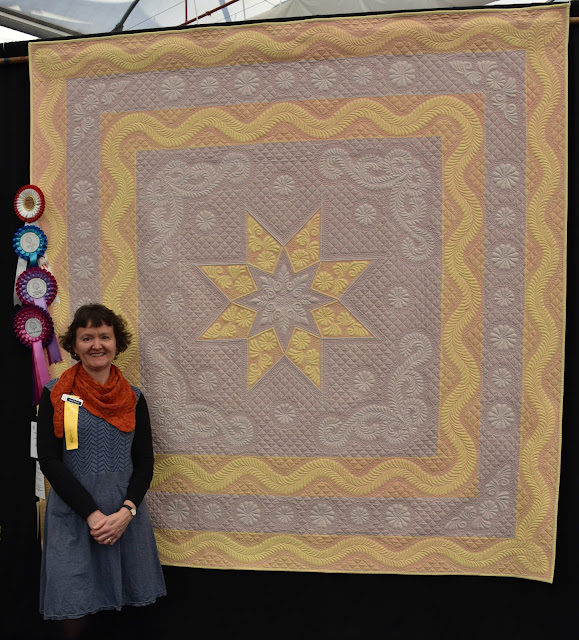 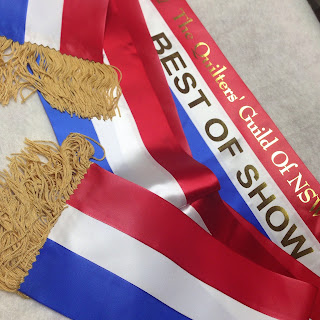 I have recently had the pleasure of quilting a Sue Spargo quilt called In Full Bloom for my customer Penny.  Penny completed this quilt as part of Sue Spargo's 2014 Block of the Month Quilt Programme.

In Full Bloom is made with beautiful wool fabric and incorporates applique and lots of embroidery embellishments.  I am sure you will agree it is a stunning quilt. 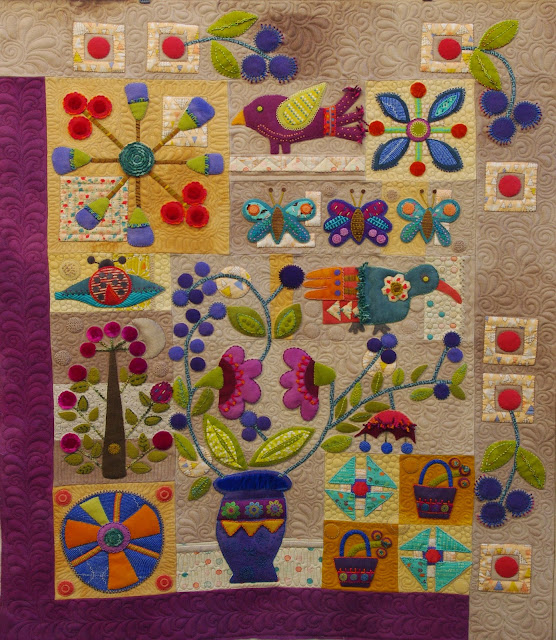 I had lots of fun with the quilting, using a number of different background designs. 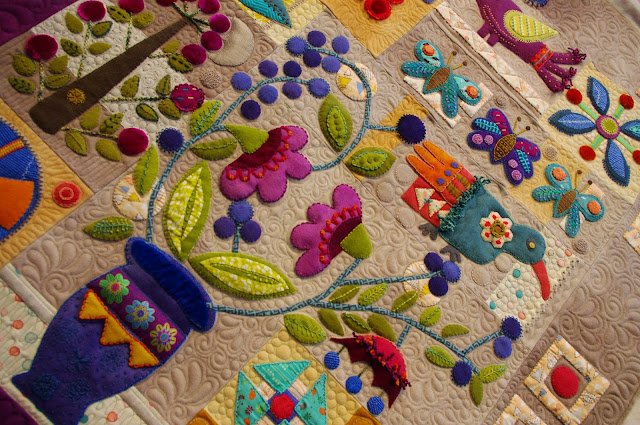 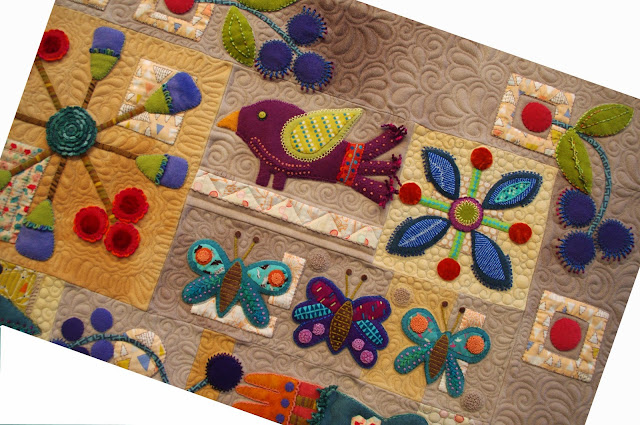 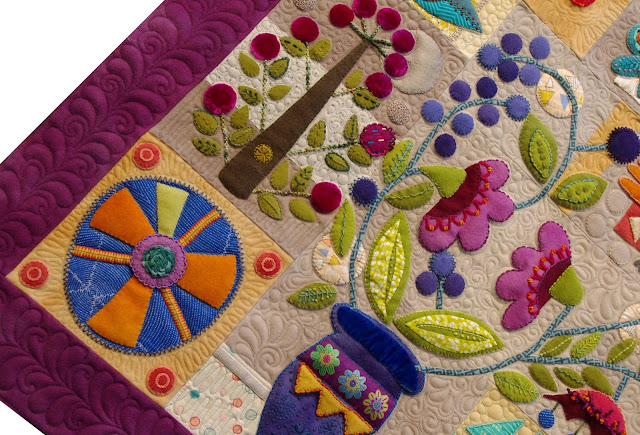 The pattern for In Full Bloom was released recently at Spring Market.

While I may have been somewhat absent from my Blog lately, I have certainly been busy quilting. Today I would like to share a beautiful Bright Birch Trees Quilt pieced by Marg.  Bright Birch Trees is a quilt pattern by Crazy Mom Quilts. 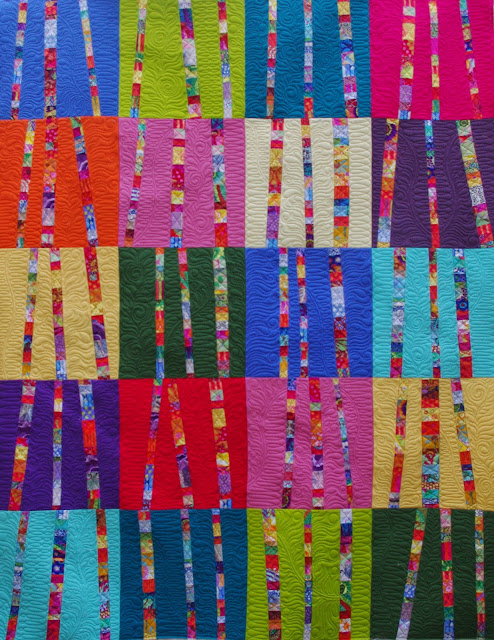 The quilt is made with a range of different coloured solids for the backgrounds which shows the quilting beautifully.  I had a wonderful time quilting Marg's quilt with fern plumes, some feathers and lots of loops. 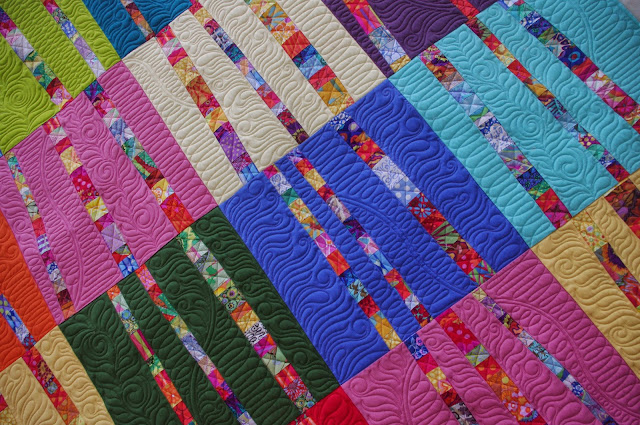 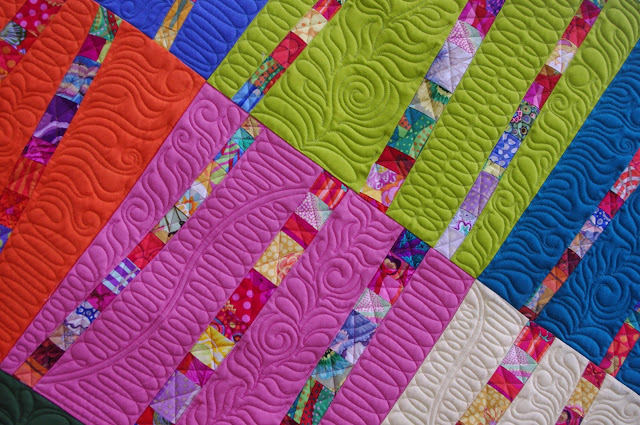 I think you will agree that this has made for a fun and happy quilt!

I recently purchased Johanna Basford's book Secret Garden.  Johanna is an illustrator who creates intricate, hand drawn illustrations predominantly, although not exclusively, in black and white. 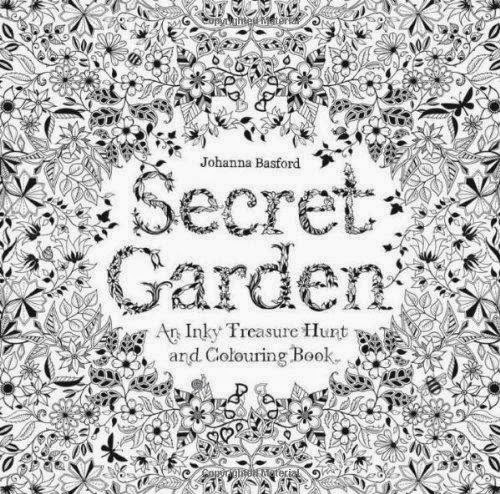 Secret Garden is an interactive activity book which takes you on a ramble through a secret garden created in beautifully detailed pen-and-ink illustrations.  The illustrations in this Inky Treasure Hunt and Colouring Book are just divine.  I was drawn to this book for the potential of some of these images to be quilted.

With Johanna's permission, I enlarged one or her illustrations and spent some fun time playing on my new quilting machine.  I was thrilled with the fine detail I was able to quilt in the piece.  My Secret Garden measures about 24 inches in diameter and was quilted on Oakshott Cotton fabric using Wonderfil Invisafil 100wt thread.  The quilt was marked with the design and quilted freehand. 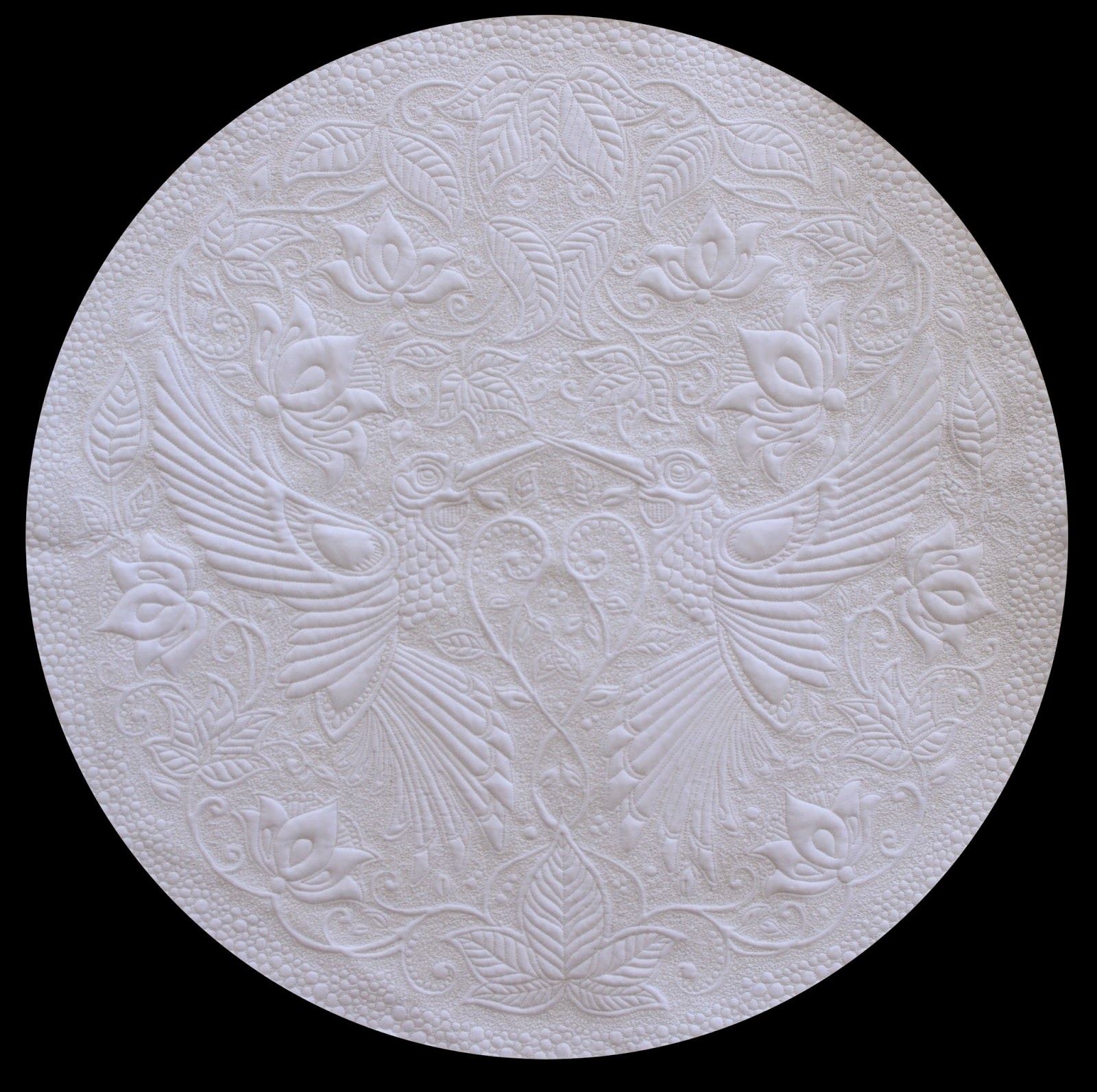 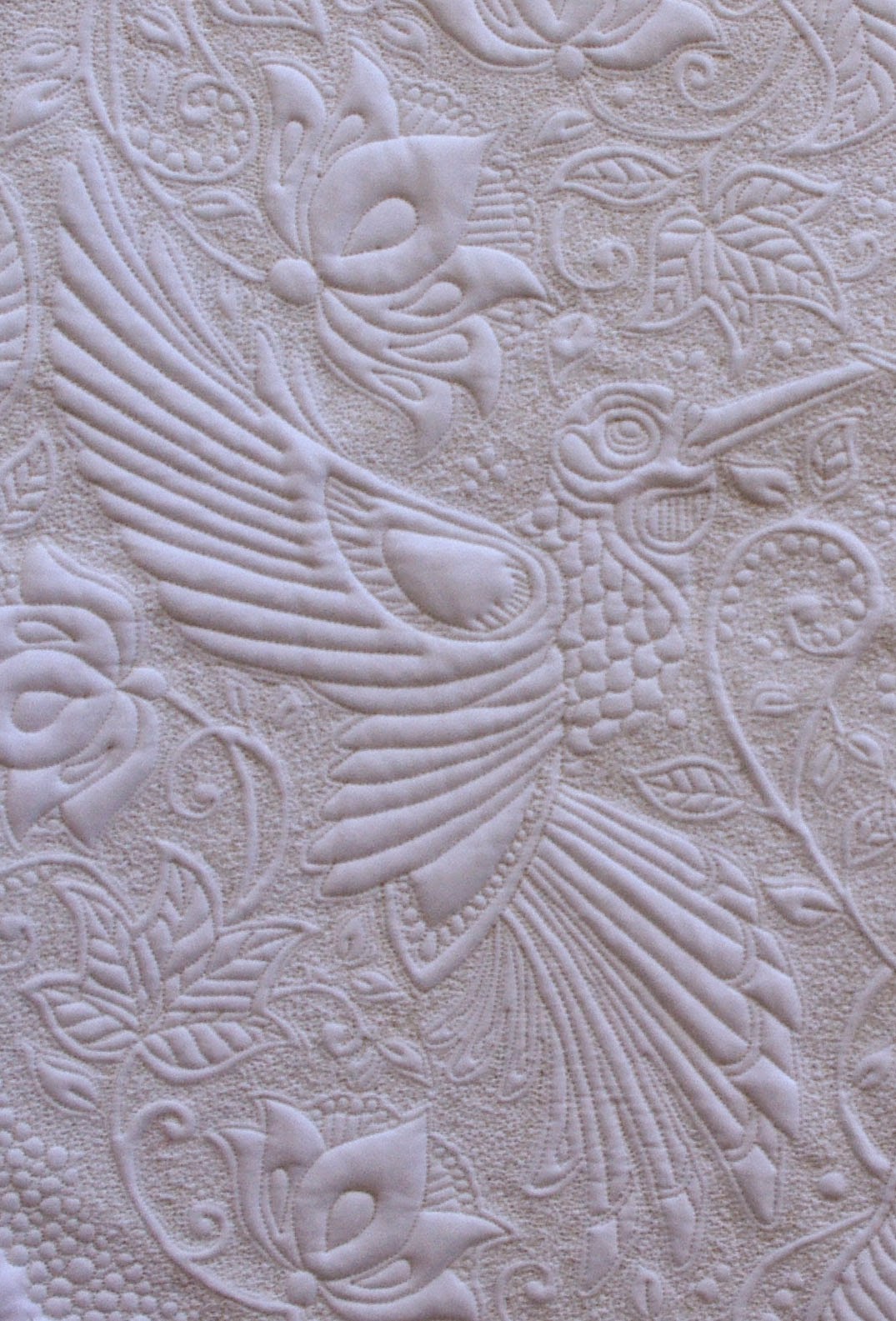 Johanna's next book Enchanted Forest:  An Inky Quest and Colouring Book is due to be released soon - I wonder what inspiration awaits there! 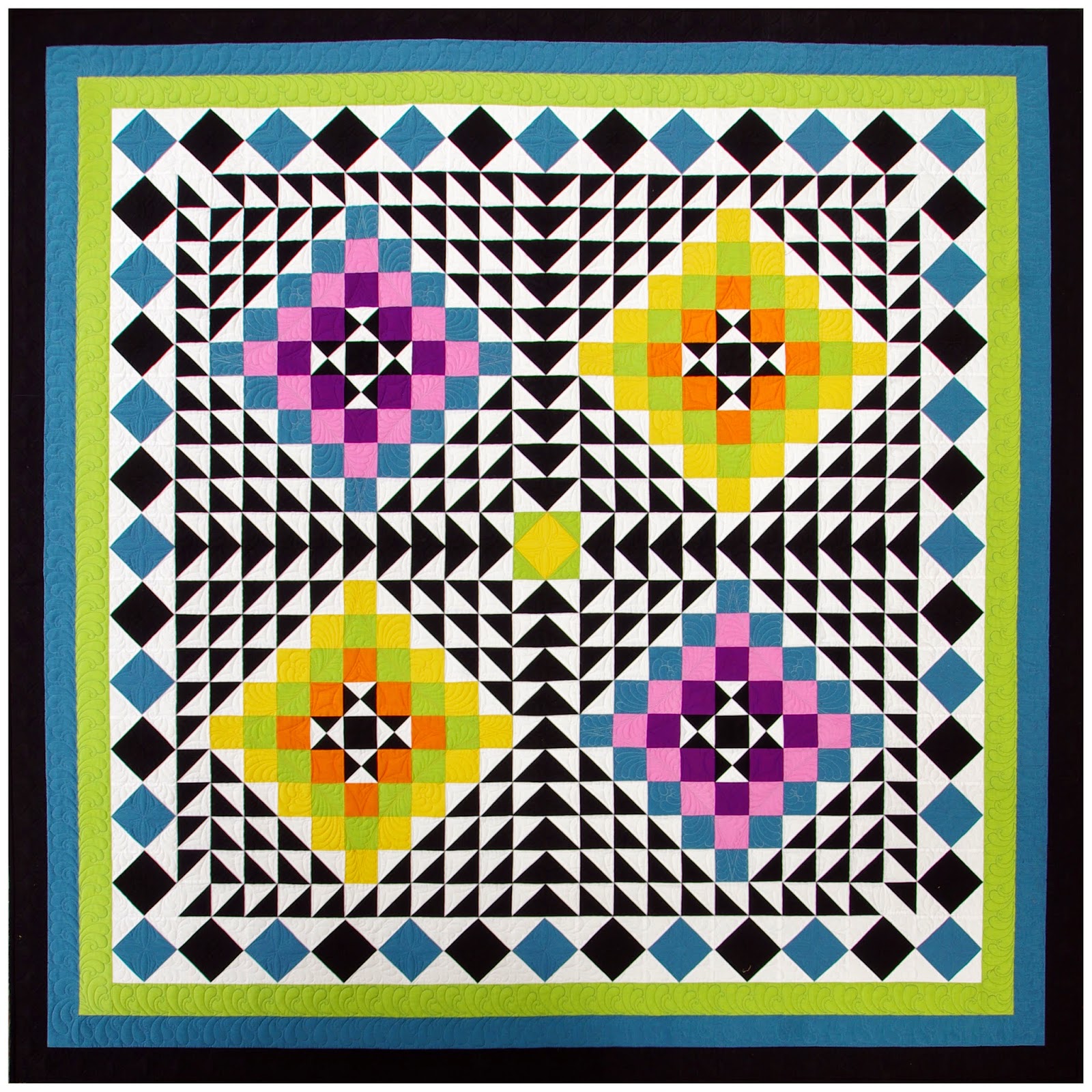 I have recently had the pleasure of working together with my sister Rita from Red Pepper Quilts on a commission project for a raffle quilt.  Rita chose the fabrics, layout and colours and pieced the quilt - I absolutely love her eye for colour - she chose a wonderful selection of Oakshott fabrics and I believe she has done an incredible job with this quilt.  I was then given free reign to quilt as desired.

The quilt was a delight to quilt - Rita's accuracy with her piecing is just incredible.  I decided to quilt with a combination of feathers, loops and continuous curves. 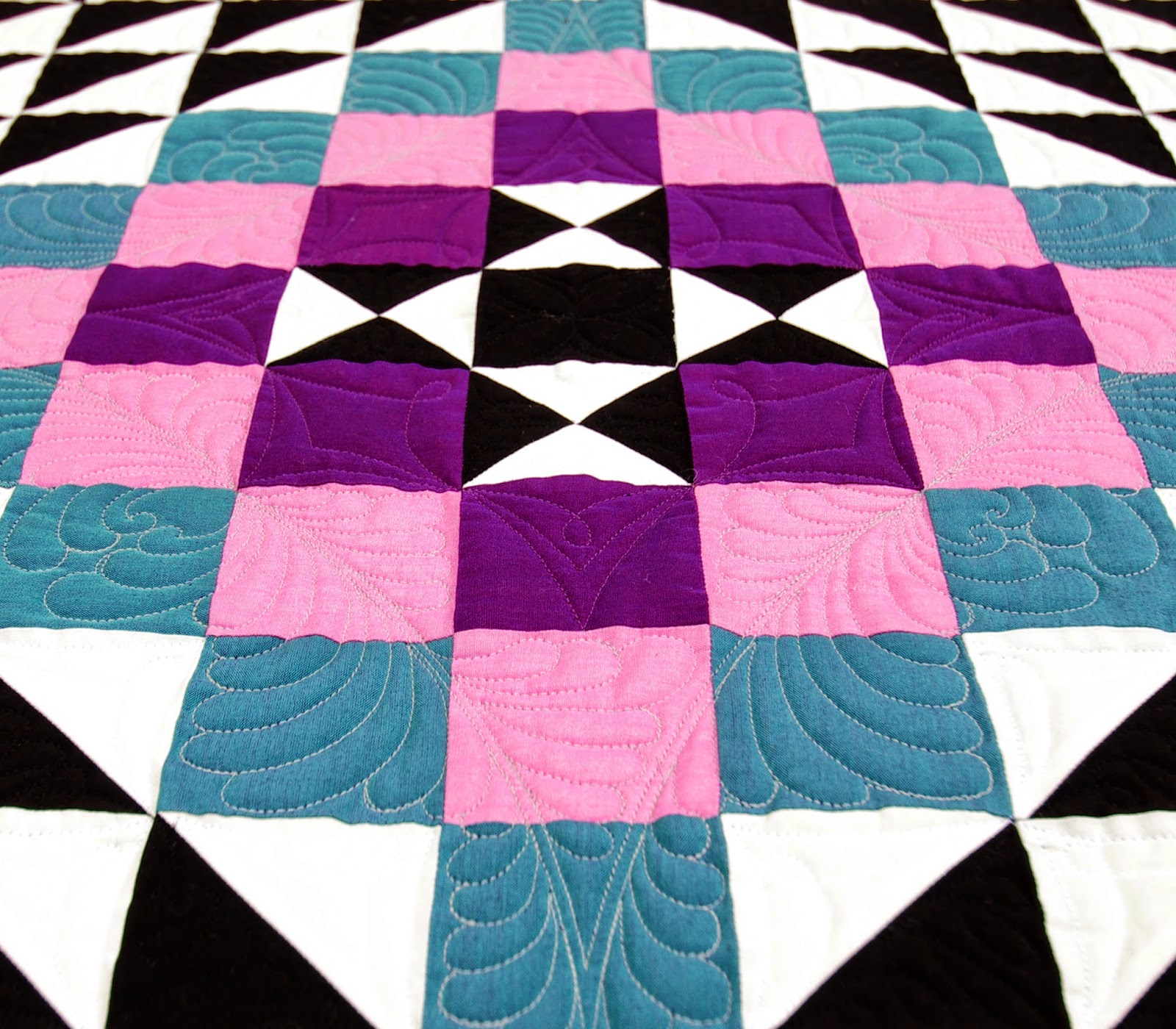 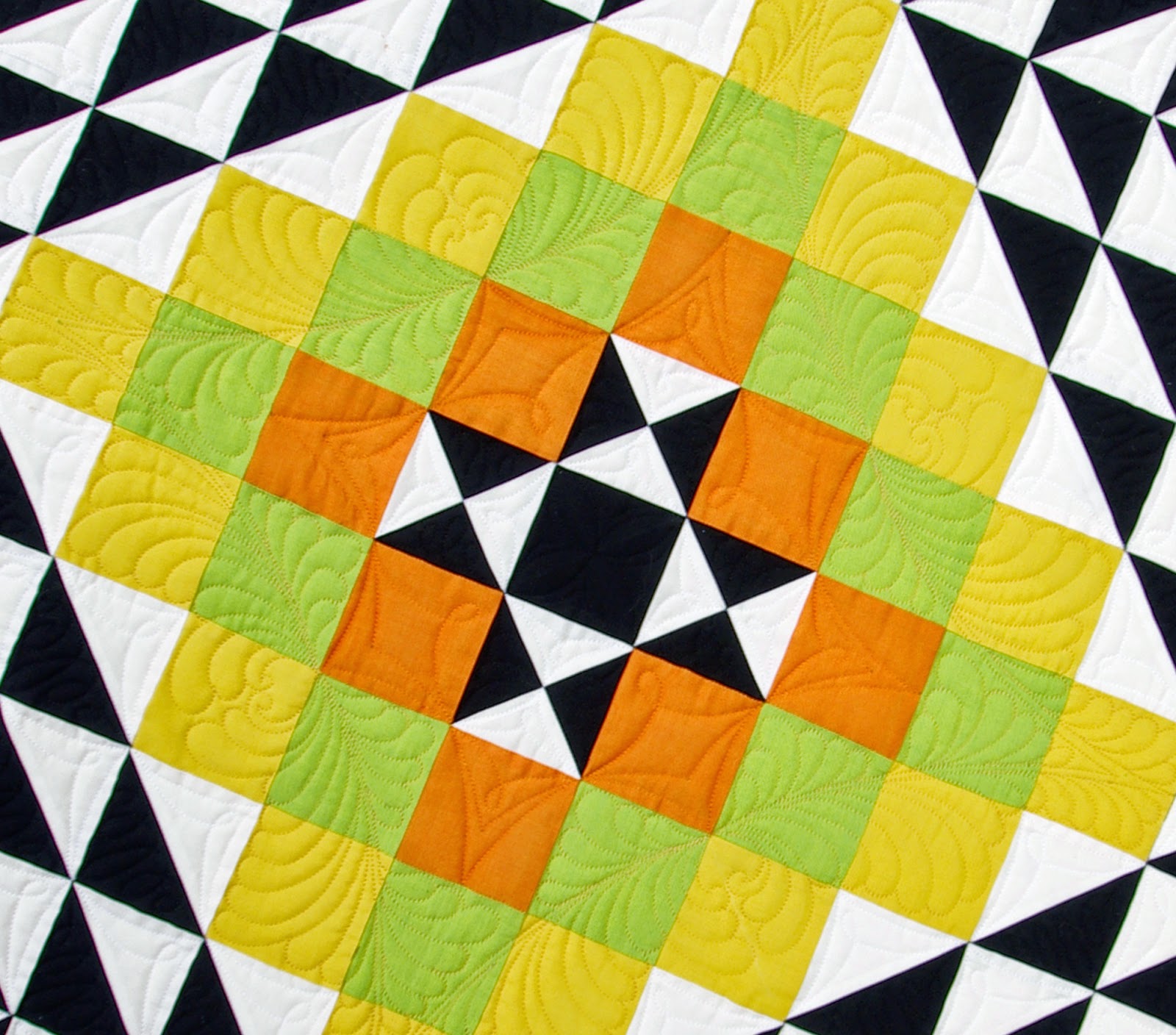 Hopefully this quilt will be a great success as a fundraiser.  I have loved working on this quilt together with Rita.  More information about the making of the quilt and further images are available at Red Pepper Quilts. 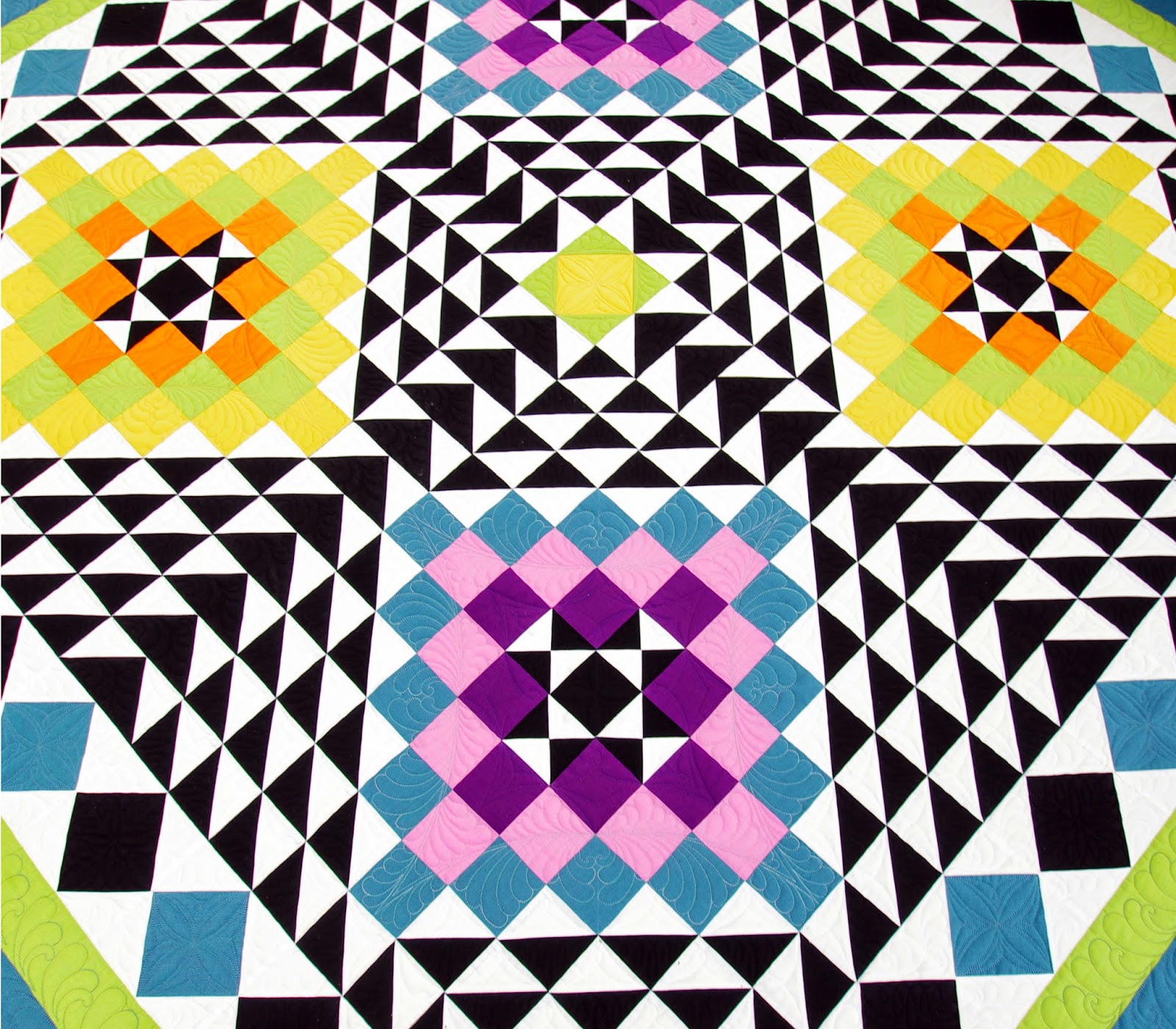 Posted by Quilts on Bastings at 2:04 PM 7 comments:

A Baby Quilt for my Neighbour

My new A1 quilting machine arrived last week and I have spent some time getting used to the differences.  I am happy to report that I am loving it.  The first quilts have now been quilted and I would like to share the very first quilt I quilted on my new machine.


The quilt is a beautiful baby quilt pieced from fabrics provided by my sister Rita from Red Pepper Quilts.  Rita and I spent an afternoon together cutting, piecing and pressing this little quilt - we had a lovely time sewing together - something we don't do together very often.  I am very lucky to be able to occasionally access her wonderful stash and her eye for colour and design. 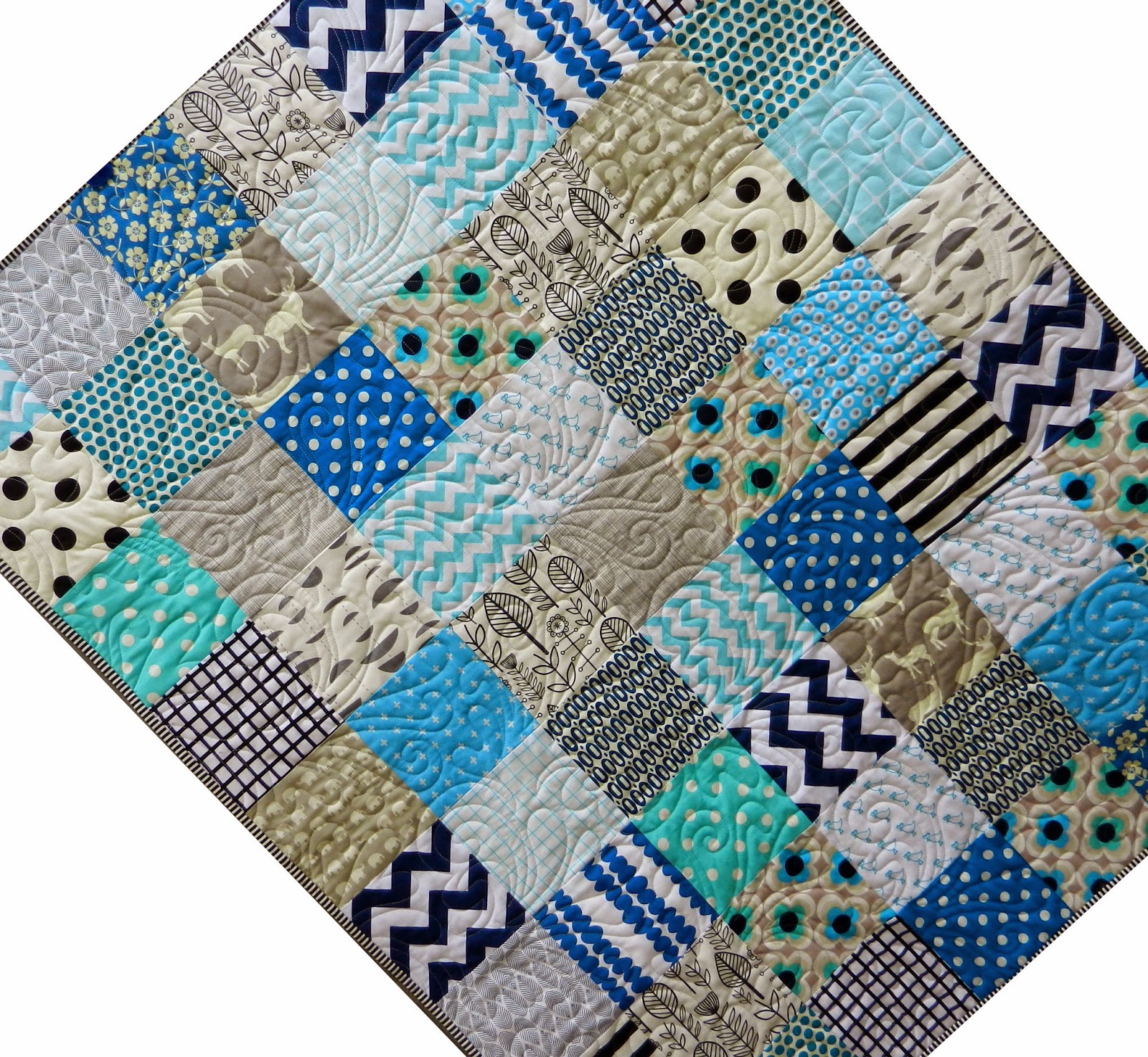 The quilt was quilted with one of my favourite all-over patterns Splash which has given it great texture.  The quilt has been made for my neighbours who have just had a baby boy - hopefully it will be well used and loved. 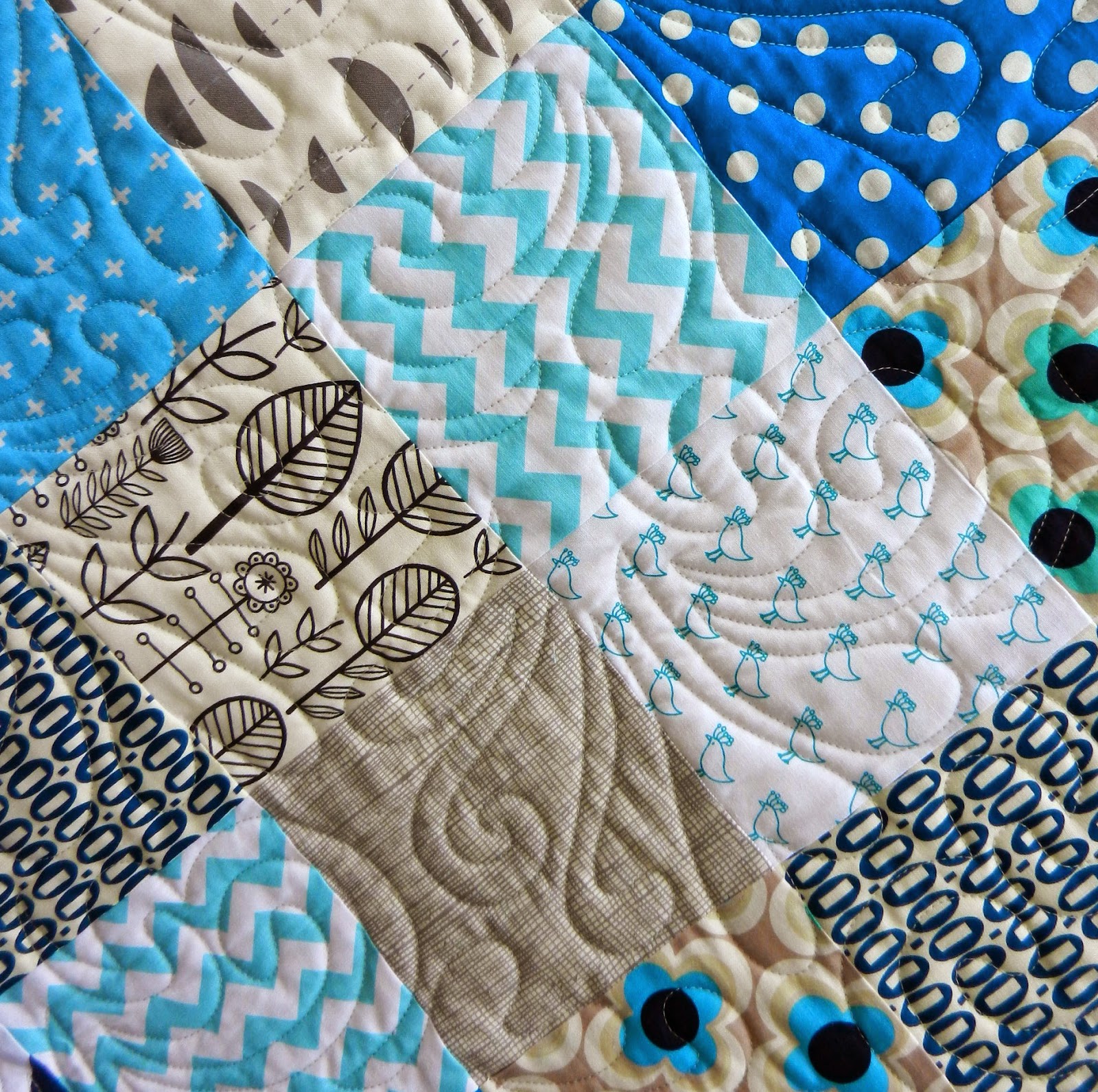 This should be the first of many more quilts to be quilted on the new A1 machine. 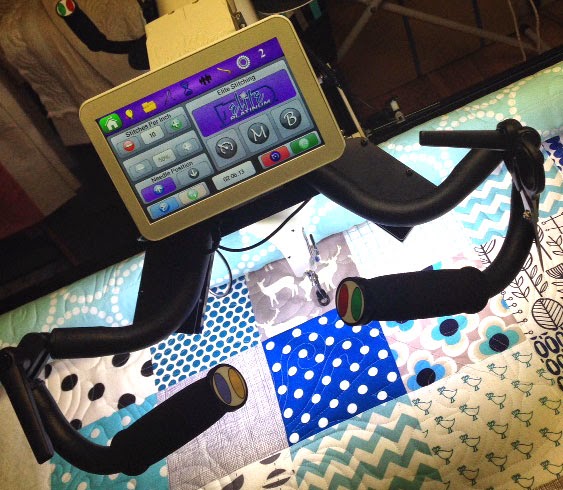 Posted by Quilts on Bastings at 3:25 PM 4 comments: